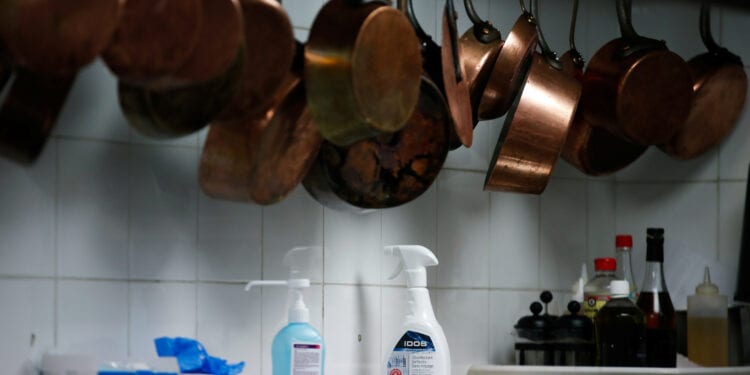 Bottles of disinfectant and hydroalcoholic solution are seen in the kitchen at Michelin-starred restaurant Le Chiberta in Paris before the announcement by the French government of more easing lockdown measures to allow the reopening of restaurants as soon as possible following the outbreak of the coronavirus disease (COVID-19) in France, May 27, 2020. REUTERS/Gonzalo Fuentes

0
SHARES
17
VIEWS
Share on FacebookShare on TwitterShare on LINE

PARIS (Reuters) – French chef Sylvain Sendra’s restaurant has been closed for months, and his employees are on furlough, but on Monday he received a morsel of good news: his restaurant had kept its star in the annual Michelin guide.

The guide, widely acknowledged as the bible of gastronomy, published its annual French edition on Monday.

Prepping a starter of cauliflower in cream and vanilla dressing in his empty restaurant, the Fleur de Pave, Sendra said the guide offered much-needed recognition for a trade that has been hit hard by the effects of the COVID-19 pandemic.

With restaurants ordered shut to try to contain the spread of the virus, Sendra’s only revenue is from private dinners he prepares for some loyal customers.

“For people who get their first star, in the period that we’re suffering through, this will be at least a comfort for them,” said the chef.

This year, just finishing the guide was a logistical headache. There were only a few weeks when restaurants were open in between COVID-19 lockdowns.

Whenever lockdown restrictions eased, the inspectors cancelled their vacations so they could squeeze in as many visits as possible before the restaurants were forced to close again, said Gwendal Poullennec, the guide’s international director.

“They were able – while sticking to our time-honoured methodology and making as many visits as usual – to establish a selection of restaurants as credible and trustworthy as in previous years,” Poullennec said.

In this year’s guide, one new restaurant was elevated to the most coveted ranking of three Michelin stars.

The AM par Alexandre Mazzia in the southern city of Marseille joined the other 29 restaurants in France that already hold the distinction.